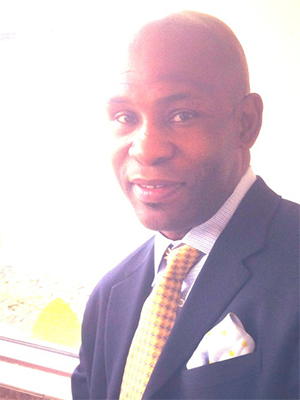 Three-time National Champion Boxer Terry Southerland of Terry Southerland Boxing-Celebrity Fitness Trainer (aka TSB) of New York City is the one to call if you want the very best in boxing or fitness training! He offers expert boxing lessons, works as a personal fitness trainer to celebrities in the New York City area, and offers private boxing lessons.

He was born in the ‘mecca’ of U.S. Boxing-- Cincinnati, Ohio. His father used to take him to boxing events when he was a child and he immediately became interested in the sport. By the age of 11, he was in the gym daily to sharpen his skills. By the age of 15, he had won his first National Championship and began competing around the world. After winning several titles, Terry joined the U.S. Navy Boxing Team and also represented the United States as a member of the National team in several world-wide tournaments, including the 1986 Goodwill Games in Russia. He concluded his amateur career with a record of 147 wins and 18 losses.

He turned pro in 1990, winning 21 fights and losing only three. He permanently took up residence in New York City in the early 1990’s and found that he enjoyed coaching and training others, bringing out the best in them. He proudly serves the borough of Manhattan as a fitness master and boxing coach to New Yorkers of all walks of life.

Terry offers private and semi-private training sessions to people of all ages, backgrounds, and fitness levels. He no longer offers professional training to certify boxing trainers, although trainers still come to him for boxing and fitness training.   Terry works as a consultant for television and film. He also works as a boxing camp trainer and has been a featured instructor in Gleason’s Gym’s Annual Fantasy Boxing Camp! Terry also offers an anti-bullying program for young people and it is his goal to help them build confidence in themselves through sports and fitness training. One of his most recent presentations was centered on ideas for incorporating fitness and boxing training into mental health management for issues such as stress, anxiety, ADHD, and bi-polar disorder. He also offers programs for weight loss and weight management.